Communicate between two micro:bits using Morse code, fishing line, a servo and a sensor! Why use micro:bit’s radio when this is so much cooler?

You can’t see the string in this gif, but it’s there between the servo and crash sensor!

How Do I Start Coding in Python?

You can write your code in Python on the official micro:bit Python editor. To run a program, click the download button, and drag the .hex file into the MICROBIT drive connected to your computer.

We’ll be using two micro:bits, one to transmit Morse code and one to receive Morse code. The transmission of data will be done over a length of string. As the servo tugs on the string (based on the encoded input), the crash sensor detects the tugging and decodes it from morse code into letters. Of course, you could transmit data over the radio component of the micro:bit, but where’s the fun in that? 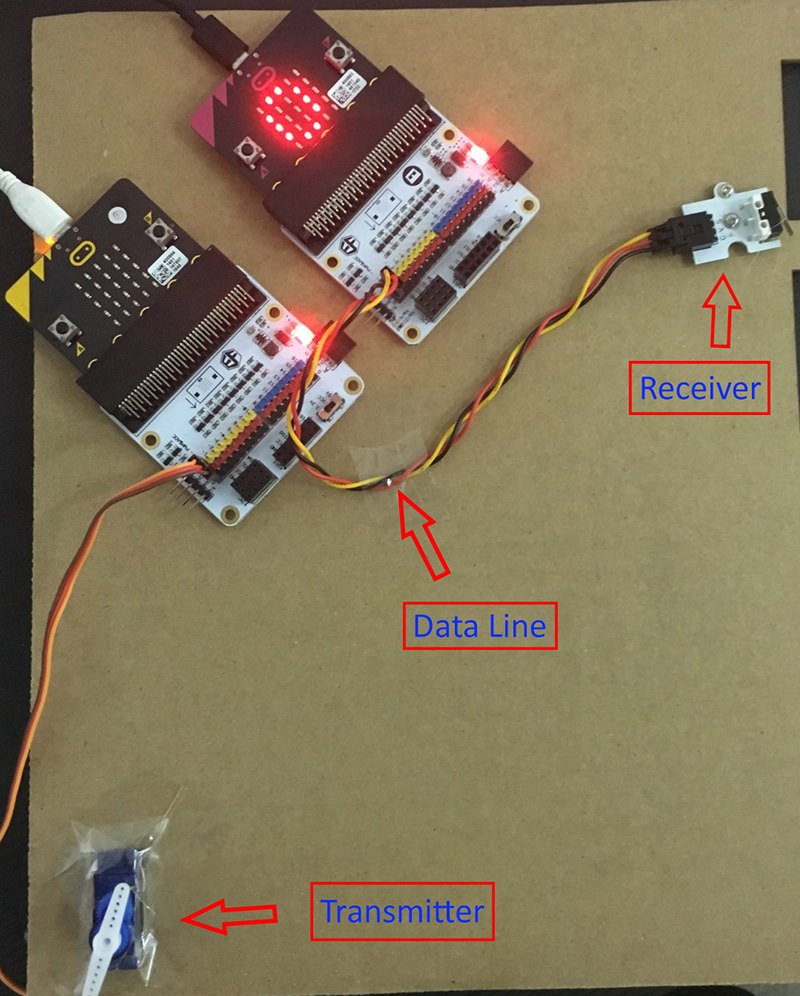 Morse code is a type of code used to transmit text by a combination of short (“.”, or “dit”) and long (“-“, or “dah”) signals. Every letter of the alphabet and number from 0 to 9 has its own Morse code representation. Letters are separated by pauses.

Suppose we are given the text “HELLO WORLD”, and would like to convert this into Morse code. First, we need to have a ‘table’ of what each letter’s morse code is, so that we could, for example, find that “E” is “.” and “W” is “.–”.

We can use one of Python’s data structures, the dictionary, which allows us to associate keys to values. In this case, the keys should be the letters of the alphabet, and the values should be the Morse code representation of the corresponding letter.

Here is a dictionary that should do the trick:

Now that we can translate each individual letter into Morse code, we should assemble the entire message, adding a space to the end of each letter to tell the receiver that a letter has been sent.

Step 2: Moving the Servo based on Morse Code

Once we’ve converted our message into the Morse code form, the next step is to move the servo based on the encoded message. In this case, dit will represent a 0.6s tug, dah a 1.2s tug, and a space a 1.6s tug.

First, we need to find the correct angles for the servos that will either tug on the sensor to activate it, or release the string to deactivate the sensor. We’ll call these values press_angle and release_angle. For this set-up, their values are 150 and 60, but this will differ based on how you’ve positioned the sensor and servo.

To move the servo, we’ll need to use a class, which can be obtained here. To use this class with the online editor, copy and paste this code at the start of the programme.

For each character (dit, dah or space), we should tug on the string for the appropriate length of time, and then release the string for a short period of time.

When the string tugs on the sensor, it will press the flap down, and this can be detected using analog input. Whenever the flap is down, the analog reading of the pin drops below a threshold value. In this case, we’ll use a threshold value of 100.

While we could use event listeners that trigger events when the flap is pressed, it’ll be easier to perform polling, which means checking the analog reading at a certain interval, in this case 0.1s.

If in a cycle, the flap is being held down, we’ll increase the press_length by 100, to keep track of how long the flap has been pressed so far. If the flap is found to be released, we can use press_length to figure out how long the button has been pressed, and use it to determine what character (dit, dah or space) has been transmitted. We’ll add this to the variable cur_letter, which keeps track of the dits and dahs that have been sent over so far. 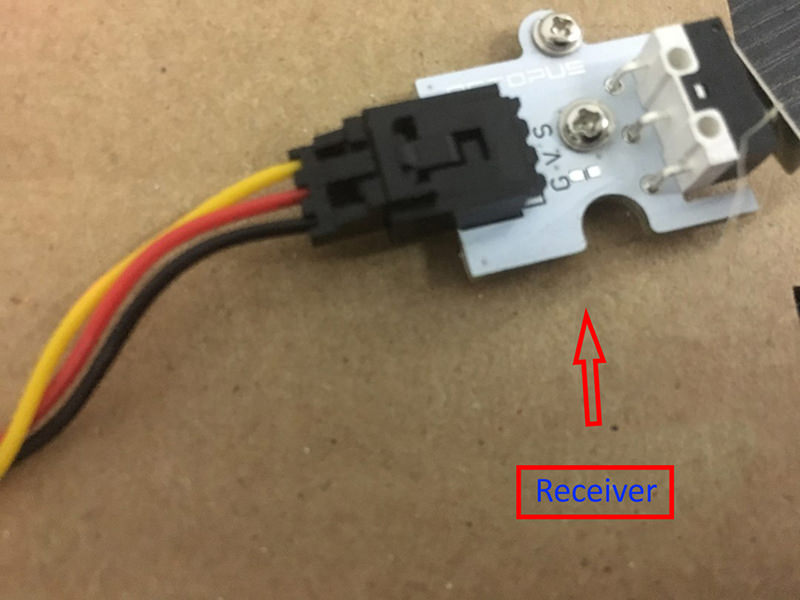 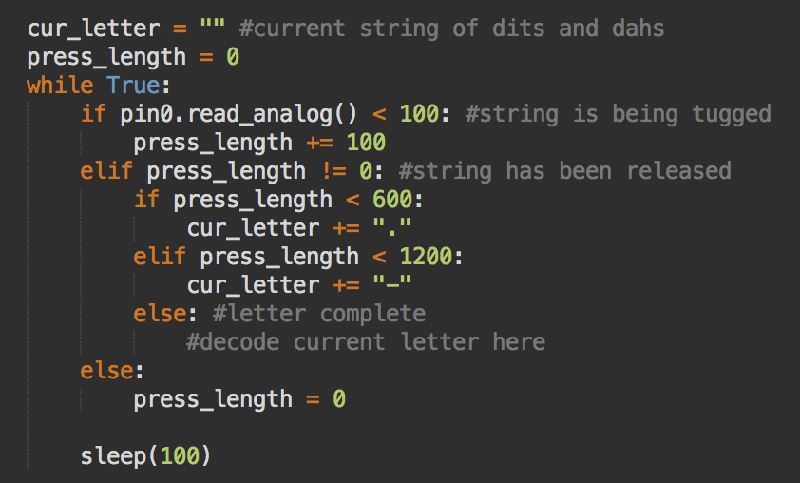 Every time a space is detected, it should take the characters (dits or dahs) detected so far, and convert that into a letter. We’ll need to use a dictionary again. This time the keys should be the Morse code representation, and the value should be the letter of the alphabet.

Here’s the code for the decoding dictionary: 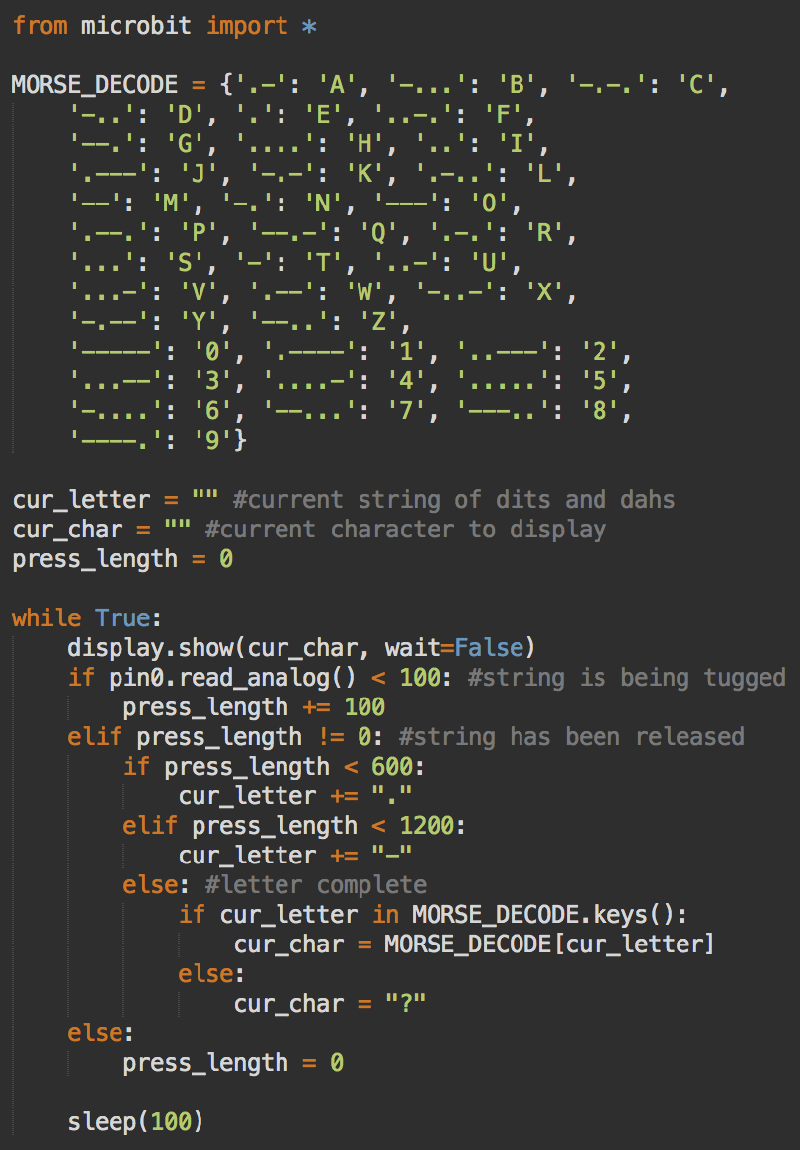 Putting it all Together

Although this method of data transmission isn’t used for …obvious reasons, many concepts in data transfer are relevant. Try to experiment with the length of string to see how long distance can be reliably transferred, and at what point the “signal” becomes too weak to be detected.

To boost the “signal”, a third micro:bit can be used as an amplifier that converts sensor signals into new tugs, similar to how signal amplifiers are installed every 20km in underwater fibre-optic cables.

Morse code certainly isn’t the most efficient way to transmit data, nor is it the most reliable way. Experiment with different types of encodings (binary + ASCII, Hamming codes, etc.), as well as explore some error-correcting codes to detect and fix any losses/errors in transmission. 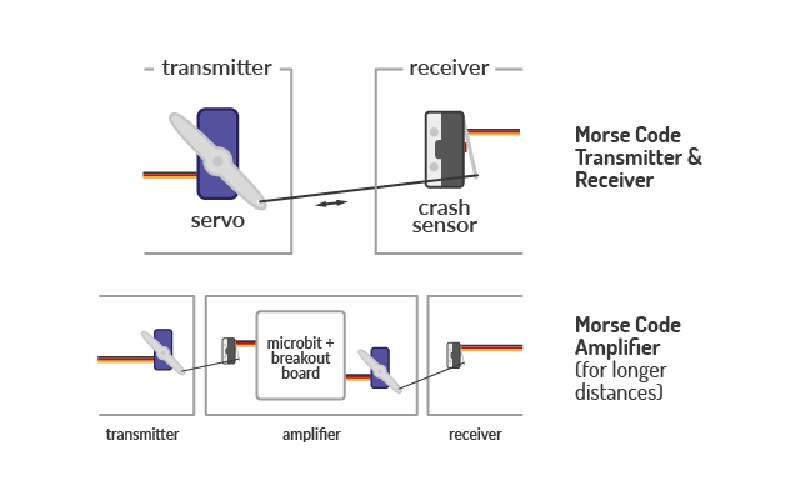